Oh, and I might as well mention the cereal. 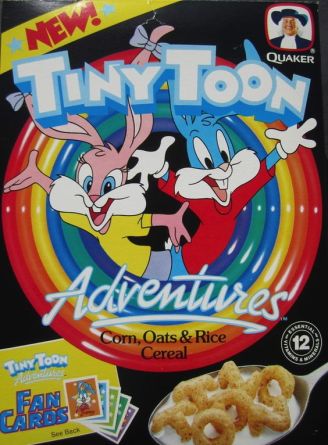 Our script sale snagged us some… interesting fringe benefits. One of them was a letter each of us got out of the blue from Quaker Oats, followed by a big box filled with a case of the new Tiny Toons cereal.

Yes. They sent us each 12 boxes of cereal.

In the video below, Cereal Time TV mentions Tiny Toons cereal being similar to Alpha-Bits, but I don’t remember it tasting quite that way (although I do also remember the Alpha-Bits of my childhood tasting differently than they did years later).

To me, it was like a less-sweet version of Cap’n Crunch, and Thirteen loved the stuff. (Thank goodness, since, y’know, 12 boxes.)

We have 9-1/2 boxes left. I think I could live on Tiny Toons cereal. And milk, of course.

I was sort of surprised to see that there’s an entire YouTube channel for breakfast cereal nostalgia… but then again, I’m of the Oregon Trail generation, which can still somehow be surprised by niches found online.

One thought on “Part of This Complete Breakfast”

This blog is not affiliated with or endorsed by Warner Bros., Amblin Entertainment, or any other companies or individuals involved with the production of Tiny Toon Adventures. All character names and images remain their property. This is a fan site, and as such, all opinions and viewpoints expressed here are strictly my own. In addition, any ads that you may see on this blog are placed there by WordPress. I have no control over which ads are displayed, and I’m not making any money from them.
Loading Comments...
%d bloggers like this: